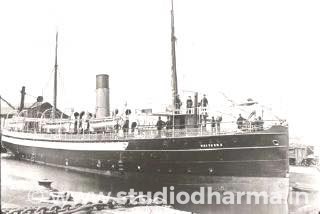 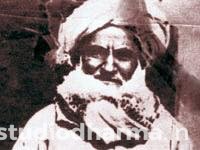 SS Vaitarna Ship. DidYouKnow that two decades before the Titanic tragedy, a massive Indian passenger ship, the SS Vaitarna sank off the coast of Gujarat killing over a thousand people? Catch the story... The poignant story of the sinking of the ship ,Titanic, is etched in our minds thanks to the oscar- winning film “TITANIC “ made in 1997 . But did you know that more then twenty years before the Titanic sank, a massive Indian ship sank off the coast of Gujarat killing an estimated 1000 people on board! Few know of the Indian Titanic and sadly there are fewer records of the people who lost their lives in that tragic accident. But here is what we do know. At the time of British India,SS Vaitarna, popularly known as Vijli or Haji Kasam ni Vijli, was a steamship owned by A J Shepherd & Co, Bombay that disappeared on 8th November 1888 off the coast of Saurashtra region of Gujarat in cyclonic storm during a crossing from Mandvi to Bombay. More than 1000 people on board went missing in the disaster. The incident resulted in the creation of nautical lores and songs. She was named Vaitarna after Vaitarna river of Bombay Presidency. She was nicknamed Vijli, literally electricity, as the ship was lit with electric bulbs. The ship is often dubbed as the "Titanic of Gujarat" even though RMS Titanic sank 24 years later. She traded between Mandvi, Cutch State and Bombay ferrying passengers and goods. She took 30 hours to travel from Mandvi to Bombay at a fare of Rs 8. Kasam Ibrahim or Haji Kasam was the captain of the ship. He was an aristocrat from Kutch holding tracts of land between in Borivali and Dahisar in Bombay. He had his office at Abdul Rehman Street and he lived at Malabar Hill. It is also believed that he was blessed by Fakir that he will own 99 ships and Vijli was his last. Haji Kasam Chawl in Bombay Central is named after him. While the disaster faded in public memory, it lives on in local village folklore along the coast of Gujarat.The most famous is the folk song ‘Haji Kasam, Tari Vijli Re Madhariye Veran Thai’( Oh Haji Kasam, your Vijli has sunk to the bottom of the sea).