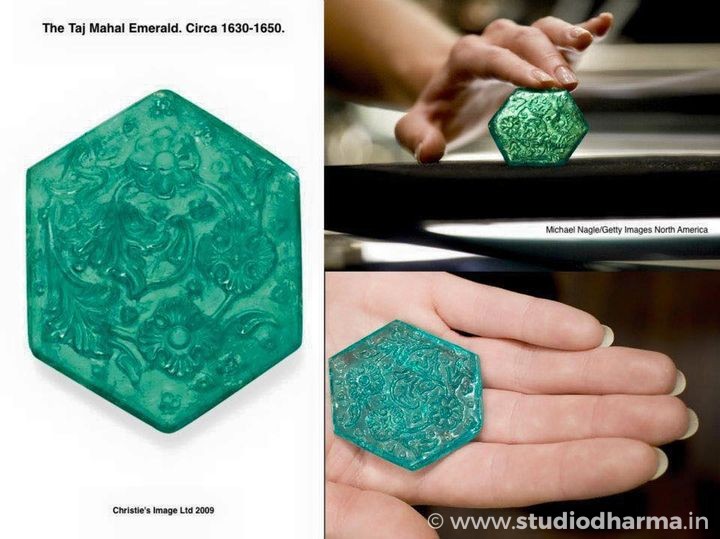 The Taj Mahal Emerald. One of the most treasured jewel in Indian history: The Taj Mahal Emerald. Circa 1630-1650. A hexagonal-cut emerald, weighing approximately 141.13 carats, it is carved with stylized chrysanthemum, lotus and Mughal poppy flowers, within asymmetrical foliage, to the plain reverse and beveled border. This intricately carved stone is one of a small group of exquisite emeralds commissioned by the Mughal Court, possibly during the reign of Emperor Shah Jahan. The name of the emerald is derived from its intricately carved surface of lotus, poppy flowers, and other foliage that mirrors the decoration of the Taj Mahal. At the Paris Exhibition of 1925, 'The Taj Mahal Emerald' was one of three large Mughal emeralds that featured prominently in Cartier’s Collier Bérénice, a spectacular shoulder ornament that also boasted pearls, diamonds, and black enamel. The rulers of Mughal India often ordered their names and titles to be inscribed on rubies, emeralds and diamonds, a practice which originated in Iran under the Timurids (1370-1507). Some of these gems ended up in the collection of the Mughal emperors who continued the tradition. In some cases, as the gems were passed down further names were added below those of the previous owners. Many were repolished, recut and re-set as they were handed down. The inscriptions were executed using the traditional cutting wheel .