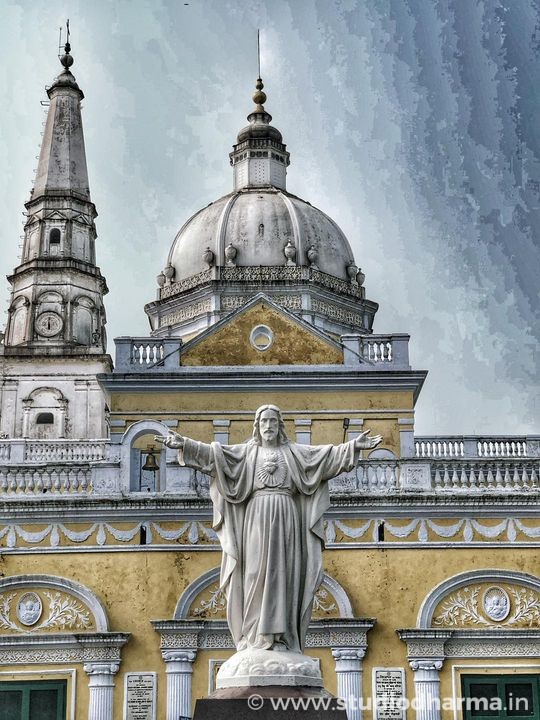 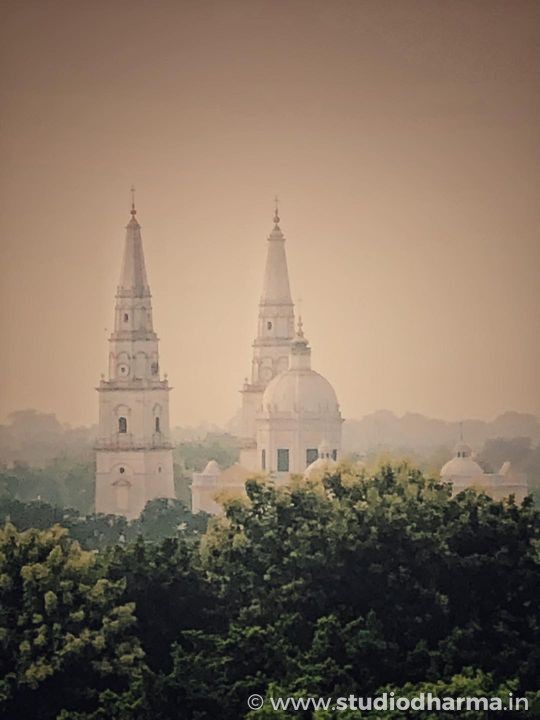 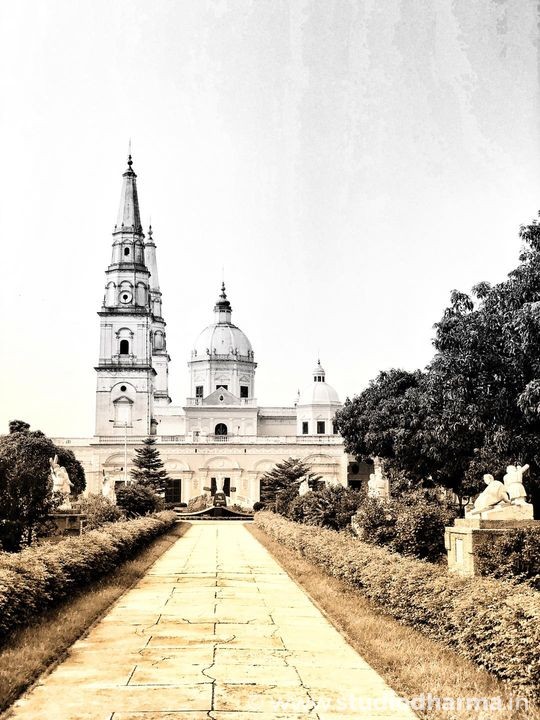 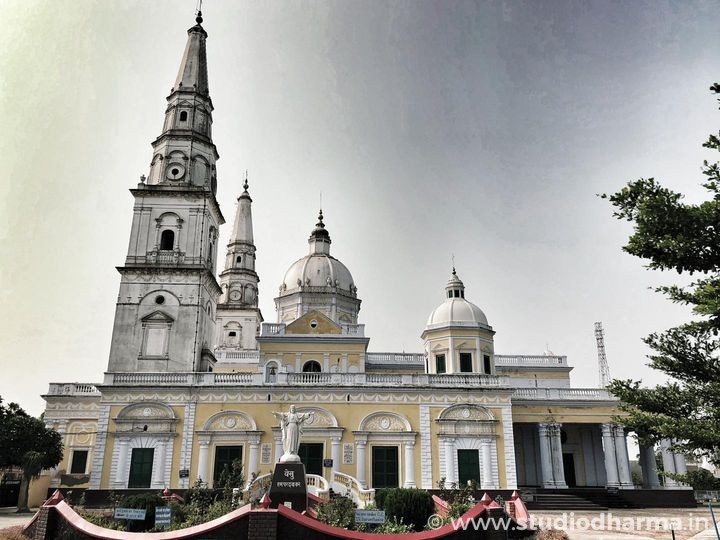 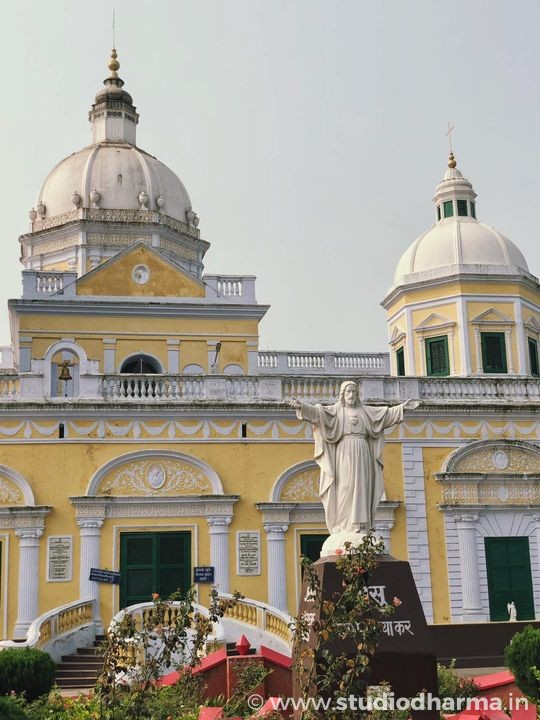 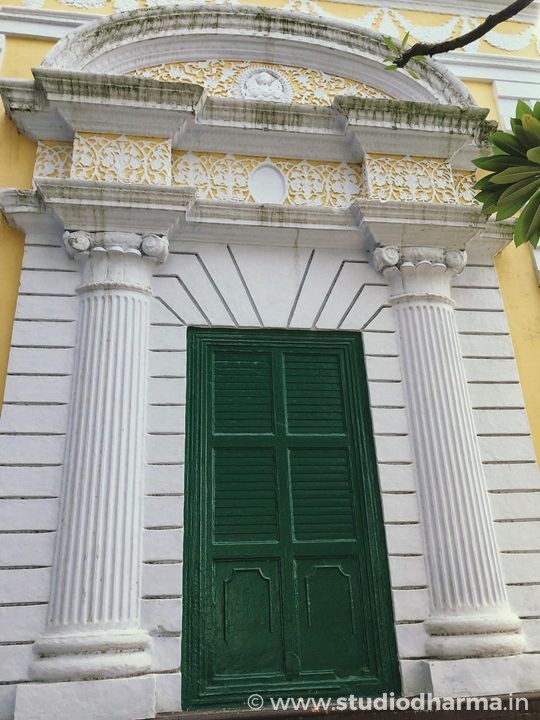 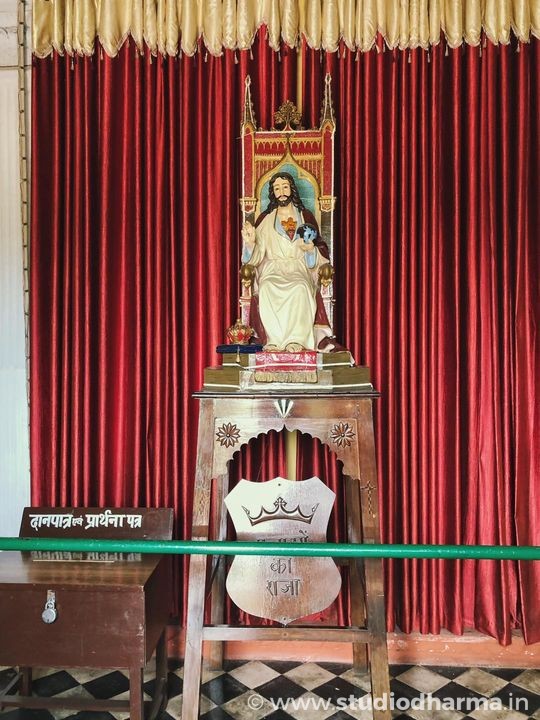 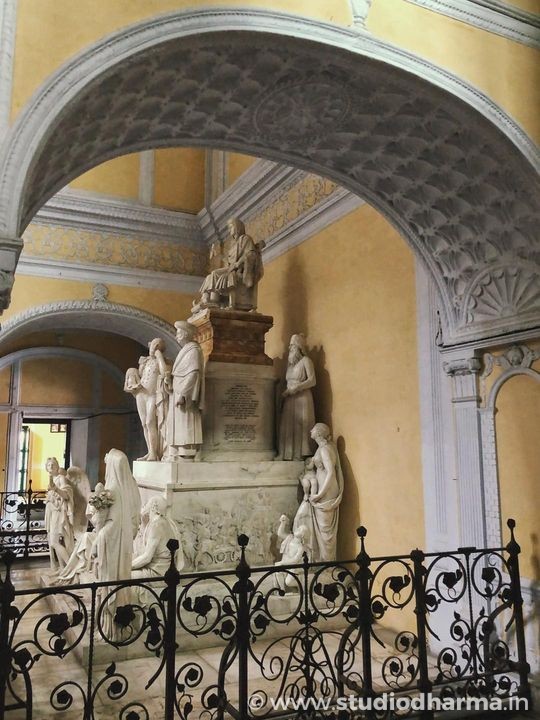 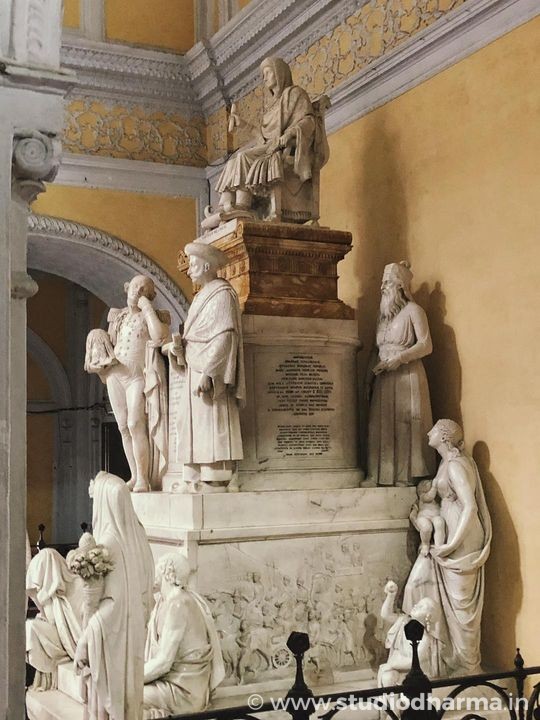 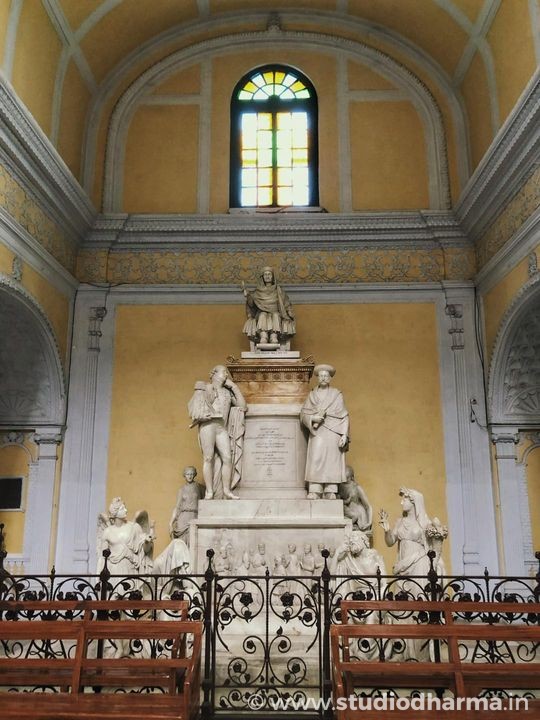 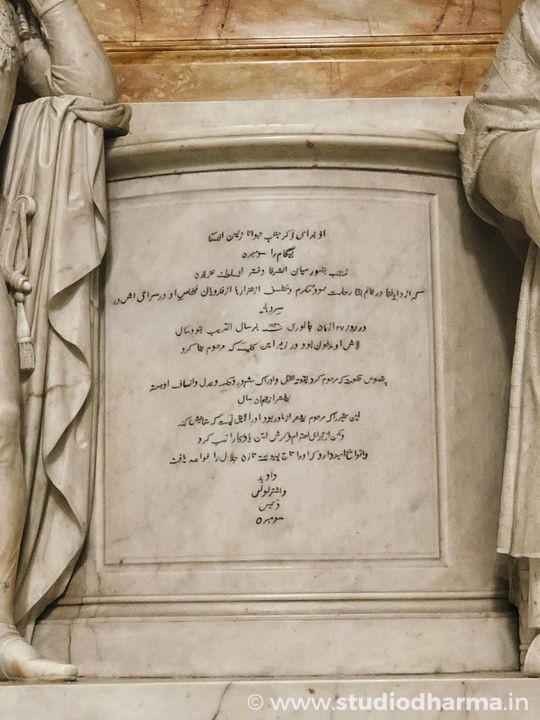 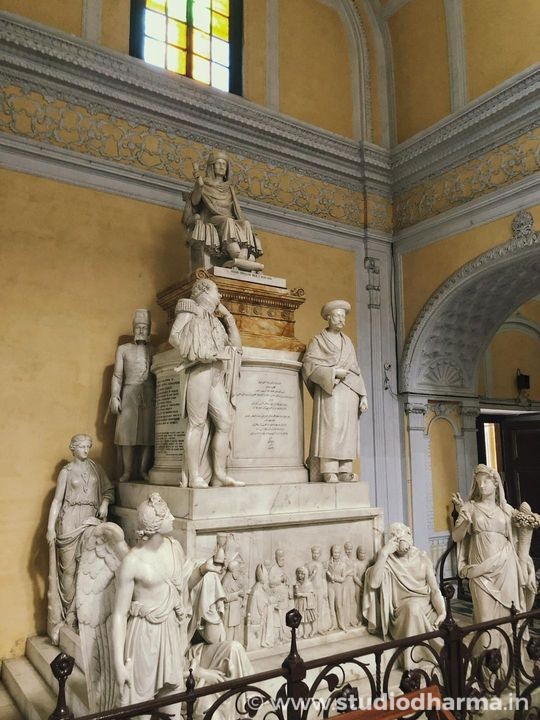 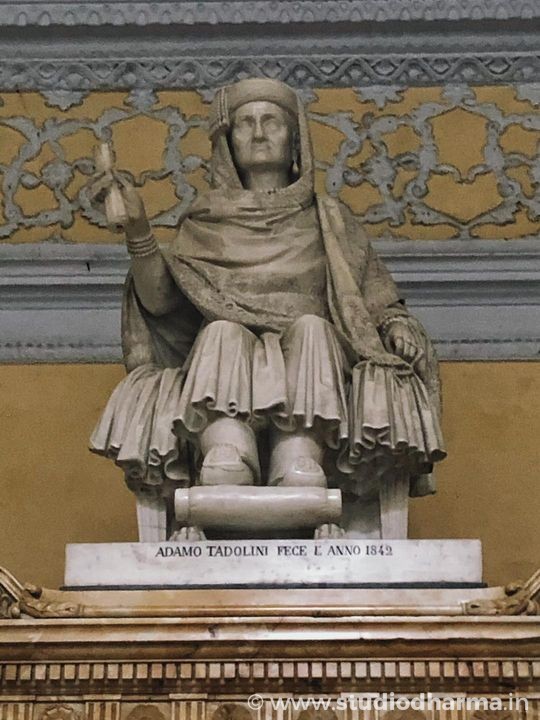 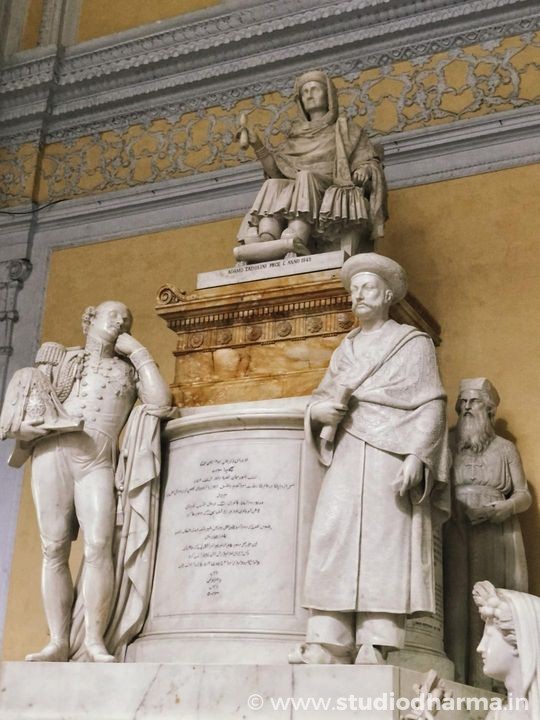 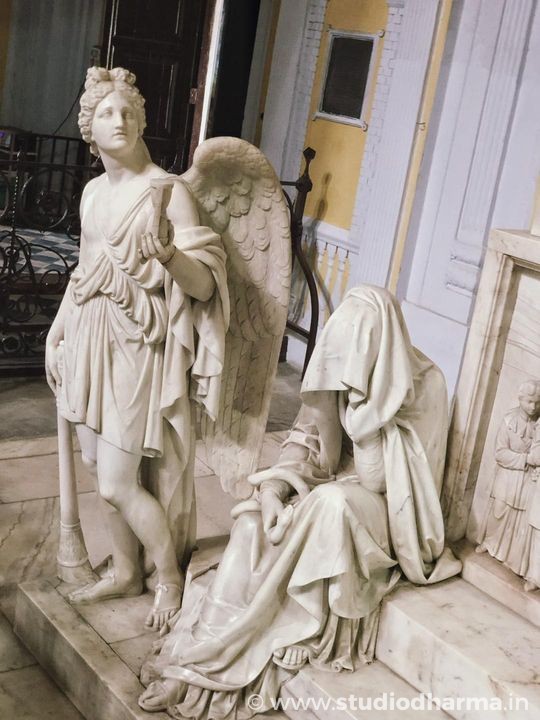 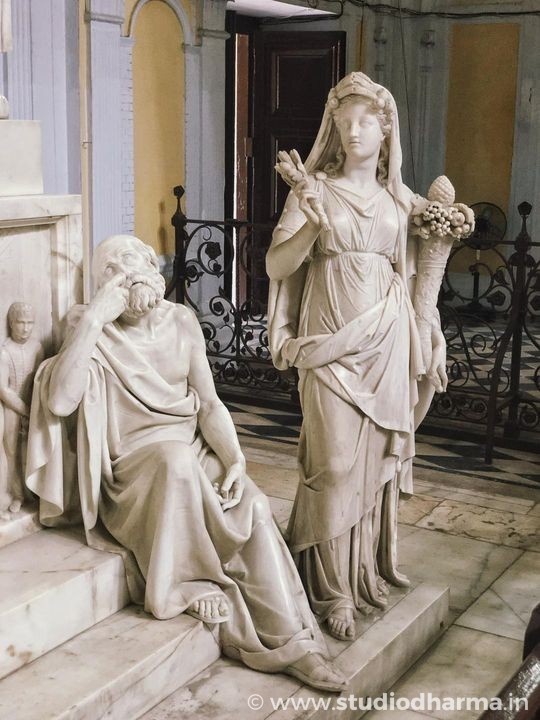 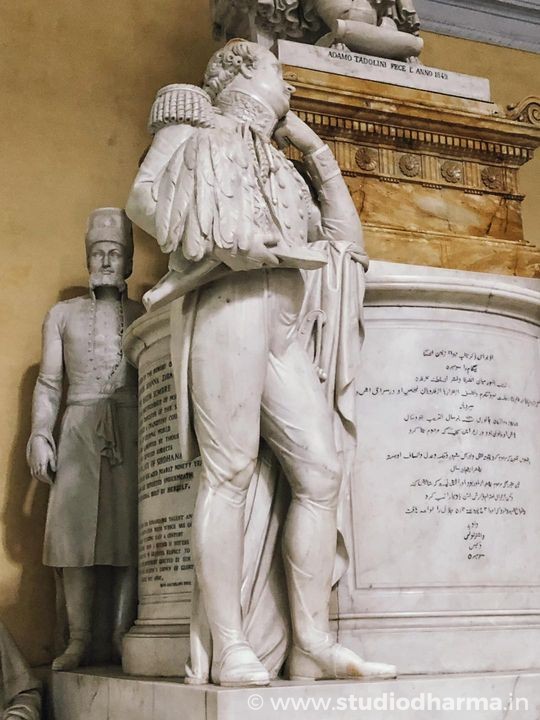 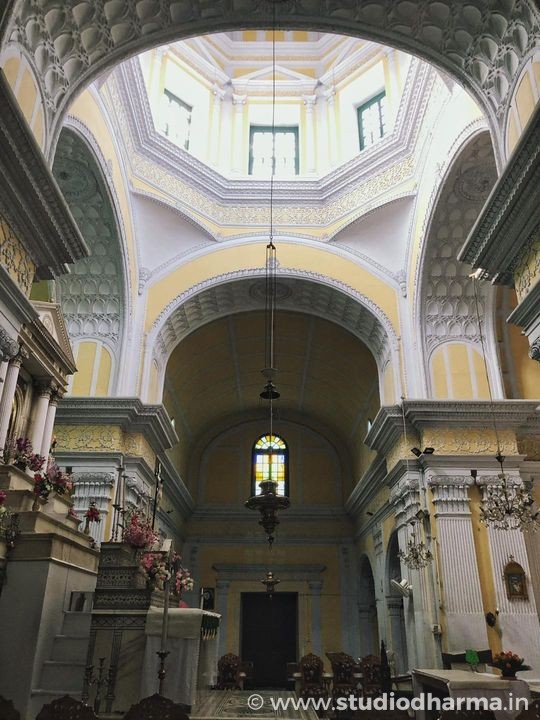 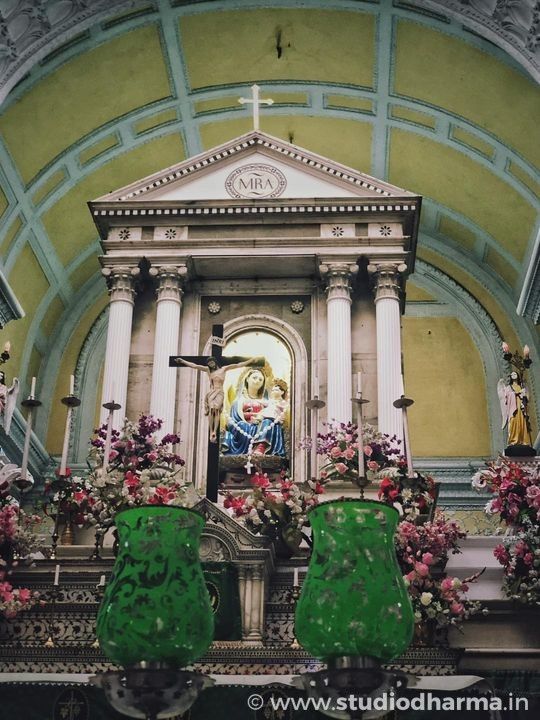 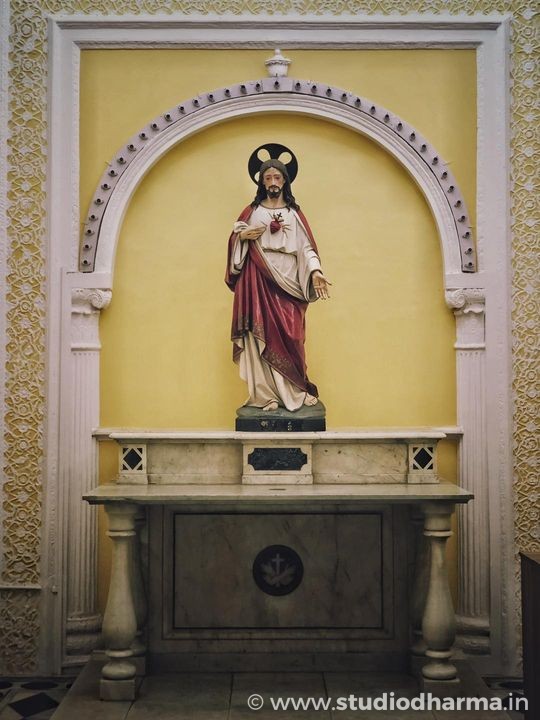 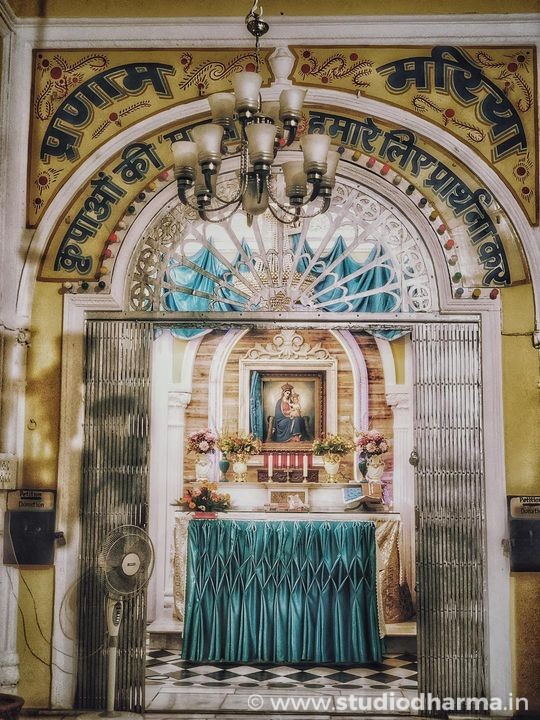 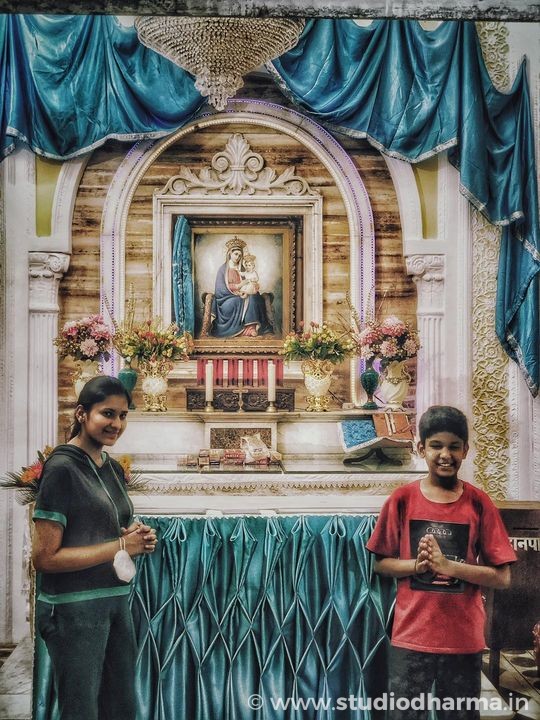 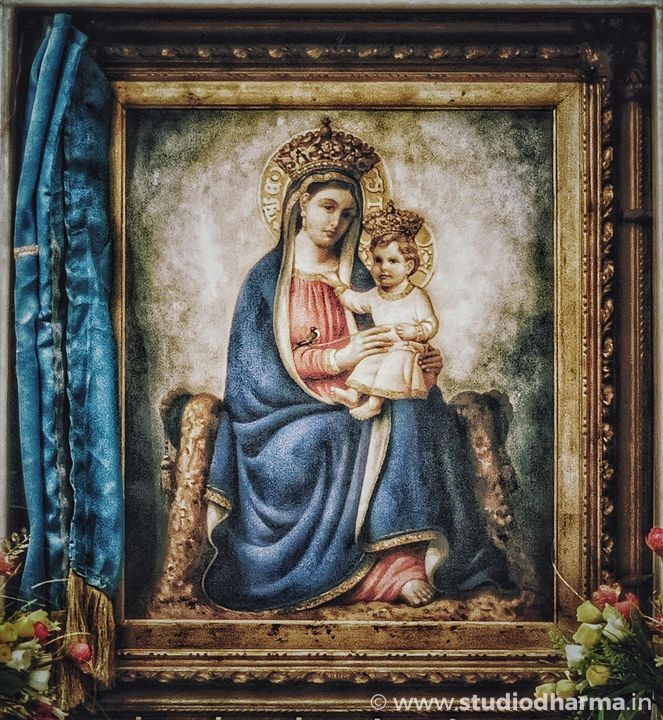 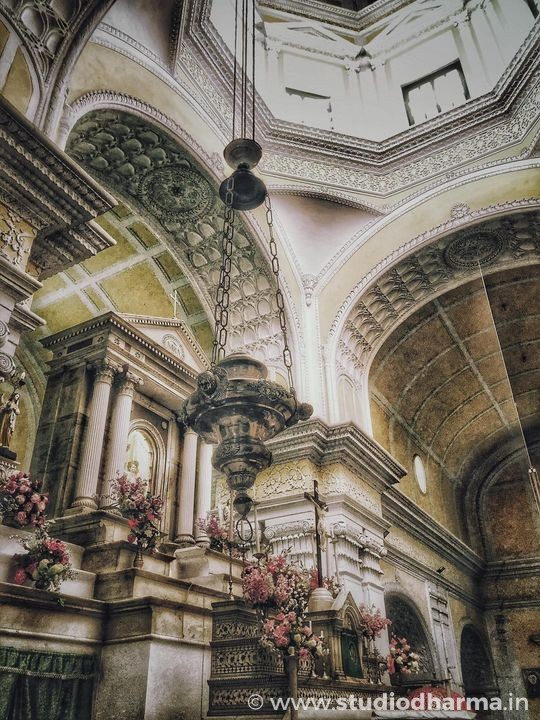 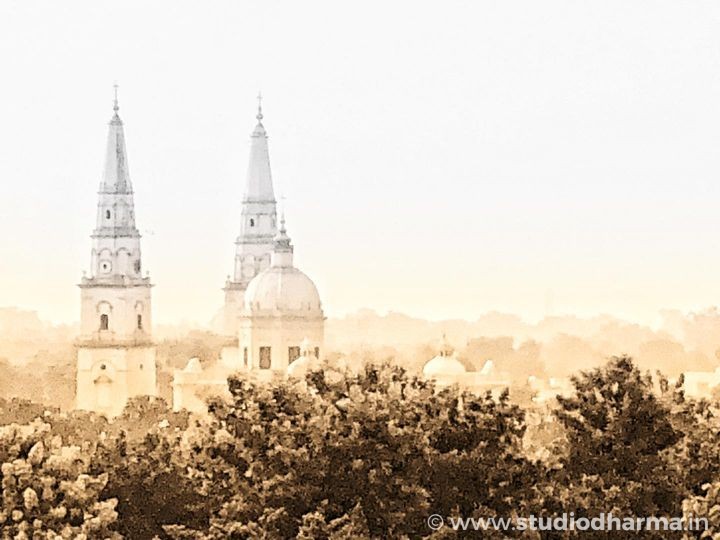 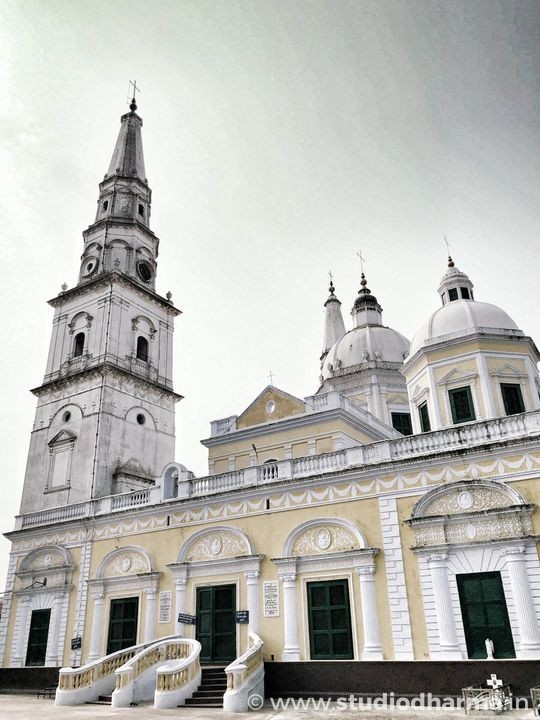 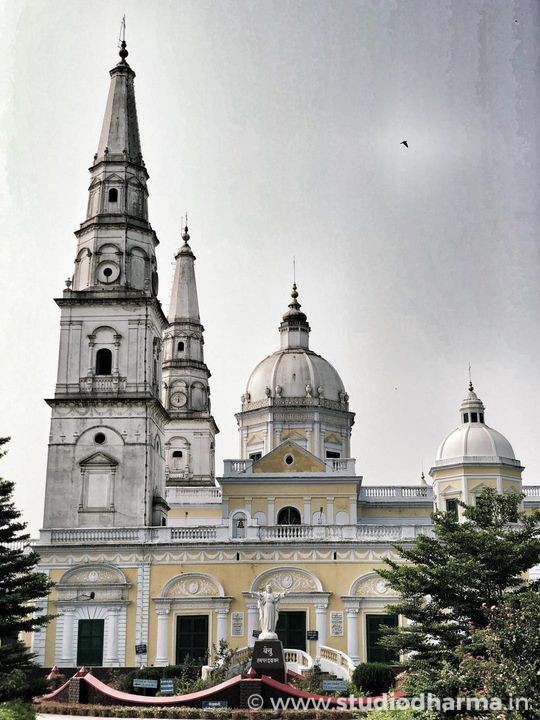 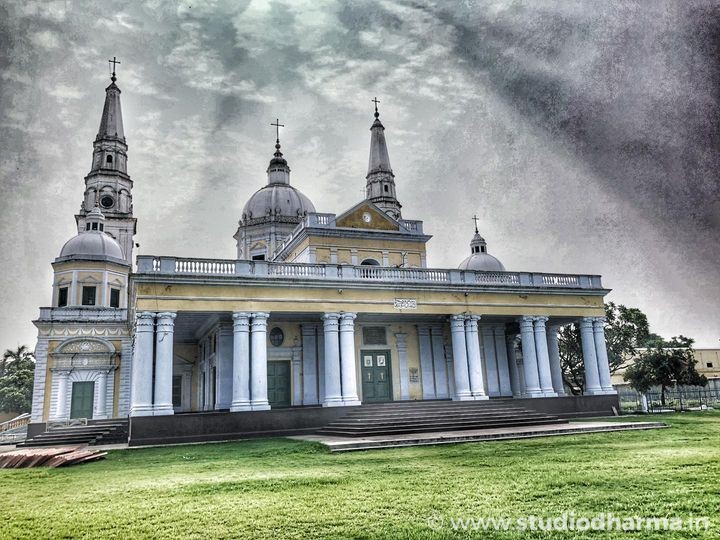 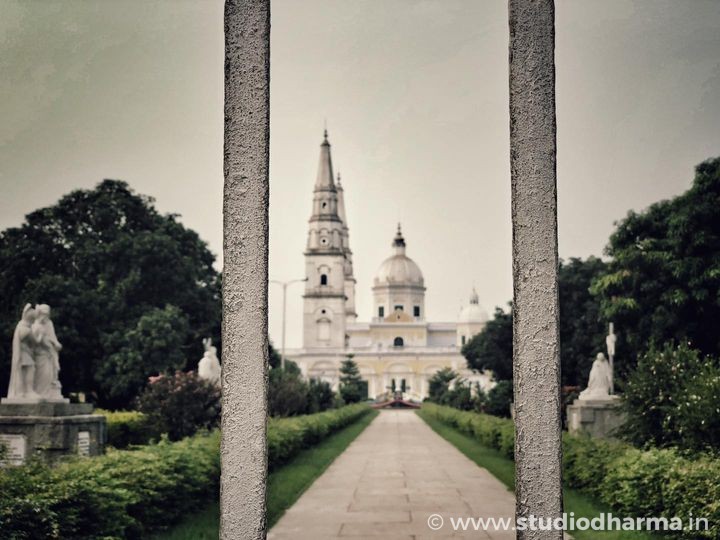 SARDHANA CHURCH,BASILICA OF OUR LADY OF GRACES ,SARDHANA,MEERUT. Also known as the Basilica of Our Lady of Graces, the Church of Sardhana is dedicated to the Virgin Mary. The church was founded by Begum Samru - a Muslim woman who married Walter Reinhardt Sombre - a European mercenary soldier. She got converted in the year 1781, and adopted a name, Joanna Nobilis. Basilica of Our Lady of Graces( the name given to certain churches granted special privileges by the Pope) is a Roman Catholic Church in Sardhana, Meerut Begum Samru inherited the Jagir of Sardhana after her husband's death in 1778. Subsequently, she decided to construct a Church at Sardhana, dedicated to Virgin Mary. The construction of the Church cost Rs. 4 lakh, a huge amount in those days. Top masons were paid the equivalent of 25 p. per day, and the labourers in shells. Begum Samru requested the Pope to make Sardhana an independent circumscription. In 1834, Pope Gregory XVI established the Apostolic Vicariate of Sardhana from the Apostolic Vicariate of Tibet-Hindustan and appointed Bishop Julius Caesar Scotti as the Apostolic Vicar. The church was the cathedral of Sardhana. However, Scotti was the only Vicar Apostolic, and eventually, the Apostolic Vicariate of Sardhana was merged into the Apostolic Vicariate of Agra. On 13 December 1961 Pope John XXIII decided to upgrade the Church to the status of Minor Basilica, a dignity that is bestowed rarely and only on churches that are both historically famous and beautiful.The church is only one of 23 minor basilicas in India and is the only minor basilica in North India. When the Begum built the church she wished to honour Mary, the Mother of Jesus, by dedicating the church to her. But she never could have dreamt that her church would honour Mary in the way it does today. Today the church is a centre of Marian devotion. It enshrines the Sacred Image of Our Lady of Graces, which Pope John XXIII, in his decree raising the church to a Basilica, calls, ``by far the most illustrious ornament in the church.'' The idea of a Shrine to our Lady was considered seriously for the first time during the Marian year of 1954. Pilgrimages were organised to this church dedicated to Our Lady to celebrate the first centenary of the Dogma of the Immaculate Conception. Near Leghorn(Italy)on the hill of Montenero, is the famous shrine of Our Lady of Graces. His Graces expressed the desire to have a copy of that miraculous Image of their Madonna for his church at Sardhana. The people responded enthusiastically and got a good painter to do the job. The picture is painted on wood in well chosen and inspiring colours. Our Lady is depicted seated, holding Jesus on her knee. With His right hand Jesus clings to His Mother, while with His left He holds a string, tied to the leg of a bird, which rests on Mary's arm. The bird represents the soul. The meaning is obvious : `To Jesus through Mary'. The soul that seeks Mary comes closer to Jesus. Devotion to the Mother ensures union with the Son. As Jesus came to us through Mary, so he wants us to come to Him through Her. The title, Our Lady of Graces, is the short form of ``Our Lady Mediatrix of all graces.'' This title simply means that as Mary cooperated in the Redemptive work of Her Son, by preparing and giving Him His body for sacrifice, and assisting at the Sacrifice of the Cross, so now she assists in the distribution of the fruits of His Incarnation and death. At Christmas she presented Him in His Flesh to us; now she presents Him in His graces to us. The people of Leghorn themselves donated two gold crowns that were affixed to the picture. These were stolen in 1972. On receiving this precious gift, His Grace took it with him when he iwent for an audience with the saintly Pope Pius XII on 25th September 1955, and laid before the Pontiff his plan of starting a shrine in northern India. The Pope most willingly approved of the idea. He venerated the Image and blessed it, expressing his conviction that the Blessed Virgin would do great things for the people of India. Basilica of Our Lady of Graces.